According to analysts from TD Securities, the EUR/USD pair has proved resilient in recent weeks, but they think this is coming to an end. They consider the recent rally to levels near 1.10 as an opportunity for short positions.

“We think the combination of slowing growth, political tensions, and shifting capital flows adds up to a negative outlook on the EUR – particularly against the USD. Add to this backdrop the EUR’s negative carry vs the USD, and we think the euro fits the bill as a funding vehicle of choice.”

“EURUSD squeezed higher in the wake of Thursday’s ECB policy decision. Spot managed to push above the 1.0890 pivot, a level that had capped rallies in recent days. We do not, however, think that event is the catalyst for the move. Instead, we think flows related to month-end portfolio rebalancing are the main culprit. As such, we think this move can quickly reverse.”

“The pop higher has not yet seriously threatened to break above key resistance around 1.10. In line with this, we think the latest move higher represents a good entry point to initiate EURUSD shorts. With the balance of risks now favoring a move lower, in our view, we are adding this position to our Model Portfolio.”

“We enter a EURUSD short at 1.0950, targeting a move down to test the March 2017 lows at 1.0495. We place our stop-loss at 1.1185. Given the uncertainties embedded within the current environment, we may rethink this position early if we get a daily close above 1.10 in the days ahead.”

Analysts at Wells Fargo expect the European Central Bank (ECB) to further expand its asset purchases at its July meeting. They argue inflation in April slowed and the Eurozone registered a record decline in GDP growth during the first quarter. According to them the risk is clearly for an earlier policy move.

“We currently expect the ECB to increase the size of its PEPP program a further €500 billion at its July meeting and likely extend that program by a few months. Before easing monetary policy further, we think the ECB would ideally like to monitor the economy and COVID-19, as well as assess the impact of its various LTRO operations, through Q2. The risk is clearly for an earlier policy move though, likely depending on the stability of Italy’s bond market in the interim.”

GBP/USD is currently trading at the higher end of today’s range following a spike from 1.2472 to a high of 1.2643, holding a 1% gain on the day in the face of a significantly weaker greenback. At the time of writing, cable is trading at 1.2597 while the DXY is trading along 99 the figure and finally gaining some traction.

Markets are offloading the USD as economic recovery prospects are taking up the headlines in financial and commodity markets pertaining to nations, and some US states, seeking to kick start their economies again by relaxing social distancing as the COVID-19 curve peaks.  DXY has dropped from 99.73 to a low of 98.81 today, although it wasn’t too long ago that it ha been testing the higher end of the 100 handle on 24h April.

As written in the latest gold news, Gold in the balance of COVID-19 waves of global resurgence, “despite the flattening of the curve and the recent calming effect in markets with stocks making a comeback (S&P 500 meets a 61.8% Fibo of stock market rout), the months ahead will probably still be quite volatile.” So, while the dollar is sinking, we are not out of the woods yet by any stretch of the imagination. DXY is testing a key support structure at this juncture, at the 50% mean reversion mark of the early March rally from below 95 the figure. Should this hold, GBP’s own intrinsic qualities will be scrutinized and potentially make way for the bears to sell back cable at a discount.

What we have seen is a recovery in the gilt market and this, as analysts at ANZ Bank explained, “has been instrumental in the GBP’s better performance over the past month.”

Maintaining confidence in the UK’s ability to finance public spending is critical for the GBP going forward.

However, with Brexit back to the fore and with potential trade war dust being kicked up by US President Donald Trump, the bulls will have a lot to contend with going forward.

The UK has until the end of June to decide whether to extend the transition period. We understand many in the cabinet would prefer not to. GBP is vulnerable to a rise in negative sentiment. How the Brexit timeline unfolds and the degree of confidence in the gilt market are key for GBP,

– the analysts at ANZ Bank said.

Overall, there is no construct bullish story out there for the pound. With sharply rising unemployment and a large twin deficit which is always going to make for a bearish case for sterling, coupled with plunging growth and the highest rats of COVID in Europe, higher cable is a hard sell right now. When you throw hard Brexit sentiment into the mix, then a fade on rallies at current levels or higher remains compelling.

We do think Brexit anxieties will resurface in the coming weeks. They could renew concerns about the UK’s future economic structure and reshine the spotlight on the UK’s huge financing requirements (about 20–25% of GDP this year). We, therefore, expect GBP weakness to re-emerge in the months ahead,

The USD/MXN pair rebounded on Thursday after hitting two-week lows at 23.63. It peaked at 24.08 and currently is hovering around 24.00, up 1.25% for the day. Emerging market currencies came under pressure after a rising during three consecutive days.

Despite rising versus currencies like ZAR, RUB and MXN, the greenback is falling sharply versus European majors. Month-end flow could have played a role in the decline of the greenback while risk aversion hit EM currencies. In Wall Street, the Dow Jones is falling 1.50%, and the Nasdaq slides 0.90%.

Economic data from Mexico and the US released on Thursday reflected the consequences of the coronavirus. In the US initial jobless claims reached 3.8 million, less than the previous week but still a dramatic number. In Mexico, real GDP contracted 1.6% during the first quarter, the worst performance since 2009.

DXY is trading near the April lows while below the 50 SMA but above the 100 and 200 SMAs on the daily chart.

DXY is on track to end April near its lows while below the main SMAs on the four-hour chart. The market will shift its attention to the 98.90 support level. A break of which could open the doors to further losses towards the 98.25 and 97.50 price levels. On the flip side, resistance can be seen near 99.30, 99.60 and the 100.00 mark.

The euro recovery attempt witnessed on Wednesday has been short-lived, and the pair has depreciated again, to explore prices below a key support level, at 0.8680. Euro rebound from week lows at 0.8688 has been unable to extend above the 20-day SMA, at 0.8750, and the pair has pulled lower on Thursday, weighed by a fairly disappointing ECB monetary policy statement. 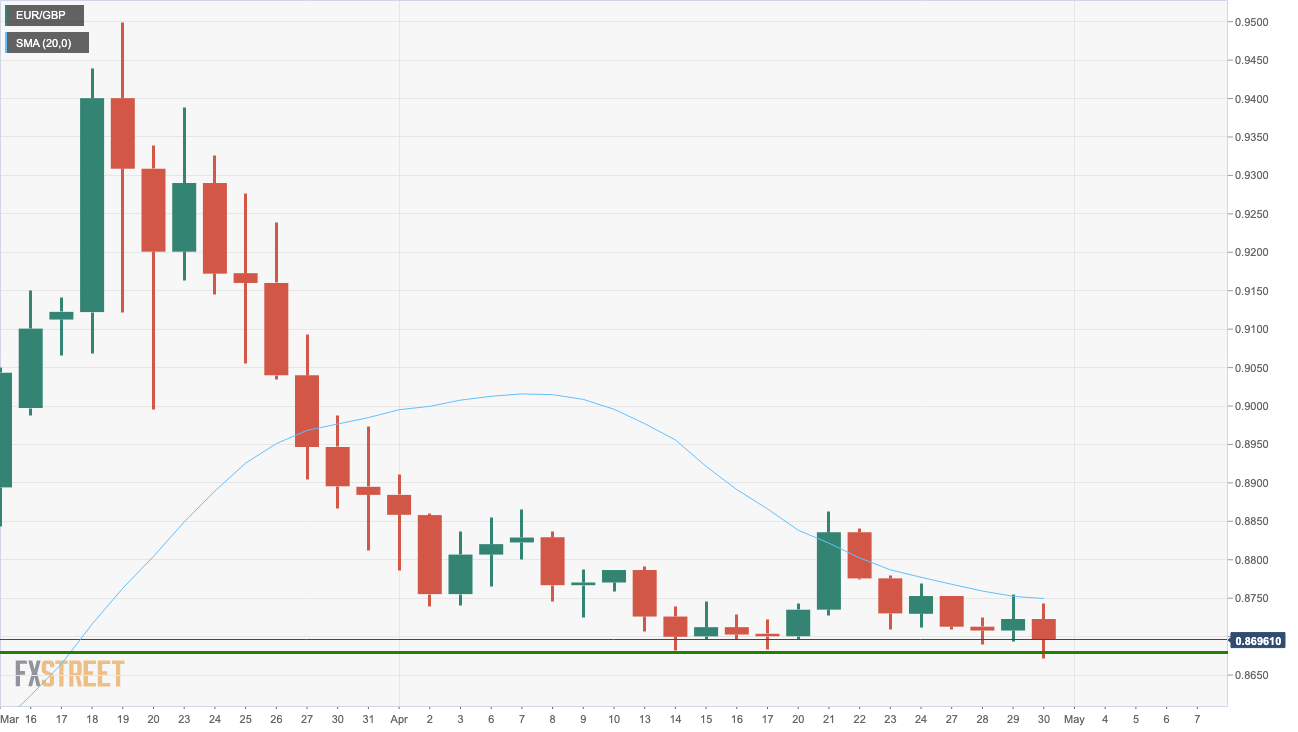 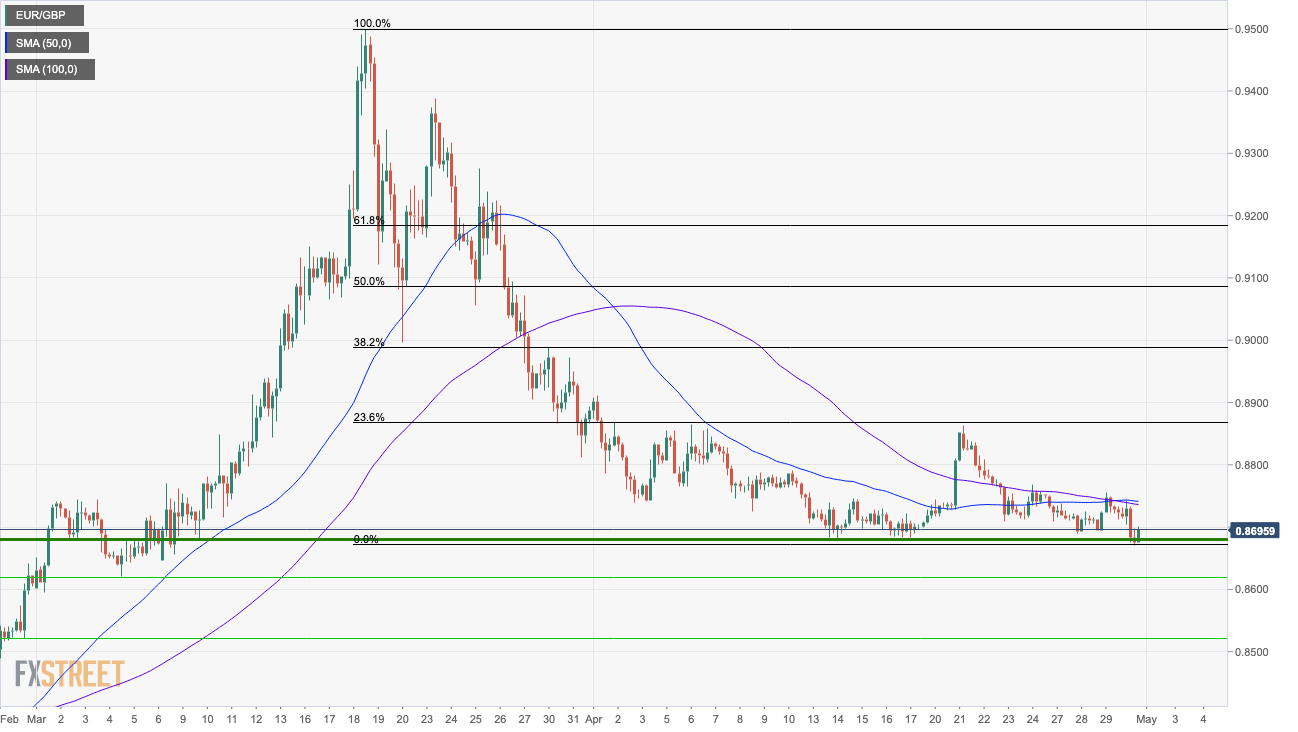